Hello dear readers! The journey that is Twitter ensues and we’re here to provide updates. Right now, it appears no brand is fully immune to Twitter’s challenges. Read along with us to learn more.

As your trusted social community management leader, we’re tracking it so you don’t have to.

Here are the biggest online events throughout fall, starting on day 1, when Elon bought Twitter. 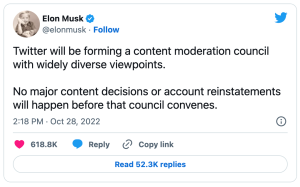 A securities filing also noted that Twitter’s stock is being delisted on the New York Stock Exchange. This would take the company from public to private.

Saturday, Oct. 29: Twitter saw a surge in racist slurs. Twitter’s Head of Safety and Integrity, Yoel Roth tweeted that the company has “seen a small number of accounts post a ton of tweets that include slurs and other derogatory terms.”

Tuesday, Nov. 1: Musk suggests charging for verification. In a series of tweets, Musk said Twitter would charge $8 per month for a verified blue check mark as part of a subscription plan.

Friday, Nov. 4: Half of Twitter’s nearly 7,500-person workforce was laid off, according to the Associated Press.

Since Musk’s takeover, several major advertisers, such as Audi, General Mills, and Pfizer, have temporarily paused ad campaigns on Twitter.

Sunday, Nov. 6: Clarification: Paid verification was reportedly delayed until after the election.

Monday, Nov. 7: Musk suggests putting all of Twitter behind a paywall and says content moderation policies will eventually evolve but remain the same for now.

Tuesday, Nov. 8: A tweet from Musk told his followers to vote for a Republican Congress to “curb the excesses of both parties.” Reporters predict his political dialogue on the platform will create a more intense partisan line on the purchase.

He then clarified to his 115M followers, “To be clear, my historical party affiliation has been Independent, with an actual voting history of entirely Democrat until this year.”

This chaos didn’t emerge out of the blue. Musk’s desire for a “town hall,” central hub started before Tesla & SpaceX. This tweet from October 4 might give us a clue. 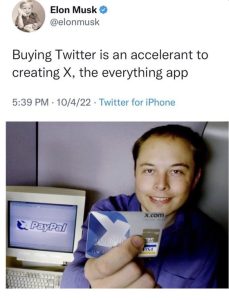 Many believe his ‘X’ is intended to replicate a version of WeChat, China’s most widely used all-inclusive people, and businesses app. The portal combines many facets of daily life — users can publish writing, call friends, book doctor’s appointments, and make financial transactions (i.e. pay taxes and even sell cars).

Musk began in the financial sector, and founded a company that eventually merged to become today’s PayPal — a successful company in the public’s eye but a halfway complete vision for Musk.

His intention today is to leverage his existing enterprises, Twitter, Tesla, SpaceX, and his PayPal connections, and find a weave it into his ‘X’ project, whether created from scratch or through an existing platform.

That said, the outlook of an “everything” app to dominate the app market outside of China is murky — censorship and regulation in China are much different than in the U.S. and other nations.

If the Kardashians can make a show to Keep Up then Twitter certainly can, and we look forward to the next Hulu special. Until then, here’s the latest timeline of events after our brief intermission. Note that paragraphs are getting longer…

Monday, November 14th: Monday’s events shook the regulated and pharmaceutical industry, as the first brand of its kind, Eli Lilly, took a fraudulent hit. An account imposter using an $8.00 Twitter Blue subscription used the check mark to masquerade as the company’s verified account @LillyPad, tweeting from @EliLillyandCo, “We are excited to announce insulin is free now”.

The resulting blow was real-world fiscal impact — Eli Lilly’s shares declined by 6% the day after, and pharmaceutical companies across the board had to remedy the confusion with costly time and resources.

Tuesday, November 15th: Responding to the wave of fraudulent accounts, Twitter paused subscriptions, and Musk announced Blue will relaunch ‘rock solid’ on Tuesday, November 29th. The relaunch comes on Giving Tuesday — a day intended for radical generosity — and falls one day after Cyber Monday, a day that saw over 97.3 million online shoppers in 2021.

Wednesday, November 16th: Elon gave his employees an ultimatum to either quit or stay at the company through an email entitled, “A Fork in the Road.” Poetic as it sounds, the email informed those who do stay to expect long, intense work hours.

Of note, leading up to this letter, Musk had already fired about 3,700 staff members, including top-level executives and creative department teams. Amongst those who have already departed of their own volition held roles in content moderation, cybersecurity, and legal compliance.

Meanwhile, Taylor Swift broke her own corner of the internet. Her upcoming Eras Tour shut down Ticketmaster as 14M Swifties clicked with fury to access tickets. We’re not sure what’s more exciting.

Thursday, November 17th: News breaks around 8:00 pm ET that Twitter closed its offices as employees quit by the hundreds as a result of the “Fork in the Road” decision. The company will keep doors closed through Monday, November 21st to confirm the departures. Meanwhile, Musk appears as ostensibly confident as ever. For this week’s scheduled communications, we’ll run with the theme of industry shake-ups, starting with Twitter.

Meanwhile, media outlets break down what exactly went south with the FTX scandal and the unstable state of the crypto market. Read more from New Yorker’s, The Intelligencer.

Sunday, November 20: CBS jumps back on Twitter. “After pausing for much of the weekend to assess the security concerns, CBS News and Stations is resuming its activity on Twitter as we continue to monitor the situation,” the news station Tweeted on Sunday morning.

Musk continues to boast about Twitter’s growing user base. Critics argue these numbers are in part because he and staff members are allowing formerly blocked users back on the platform, including bots and spam accounts. 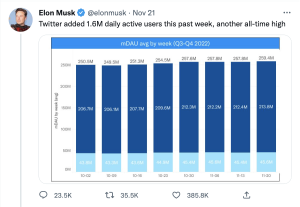 Tuesday, November 22: Twitter has allegedly gone from 7,500 staff members in September to around 2,700 now. The staff cuts are leading to advertising campaign issues and content moderation changes, both largely unwelcome by corporate entities to private users.

Earlier in the week, the Product Lead at Reddit, Peter Yang, tweeted one example of a brand advertiser’s qualms (Peter Yang has historically been optimistic about Twitter’s future within the creator economy). 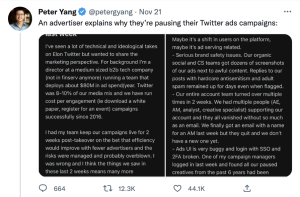 The New York Times claims that Elon’s tactics are far from unusual for the entrepreneur. They wrote, “David Deak, who worked at Tesla from 2014 to 2016 as a senior engineering manager overseeing a supply chain for battery materials, said Mr. Musk ‘clearly thrives in existential circumstances.’ He added, ‘He quasi creates them to light the fire under everybody.’”

Sunday, November 27: Elon returns from the U.S. Thanksgiving holiday with this to say:

Monday, November 28: Then, Apple comes into the picture. 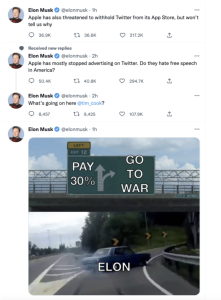 While still fully unverified claims, Reuters quickly reported on the matter, stating, “[Apple] spent an estimated $131,600 on Twitter ads between Nov. 10 and Nov. 16, down from $220,800 between Oct. 16 and Oct. 22, the week before Musk closed the Twitter deal, according to ad measurement firm Pathmatics.” 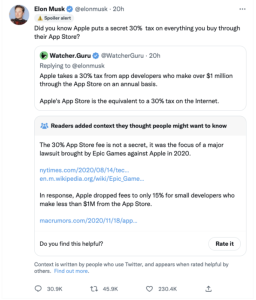 Ready to Level Up?

Our social media experts are ready to supercharge your social platforms. Click the get started button to learn more.

Social media insights to your inbox

We take the most important developments and turn them into a curated, easily digestible newsletter delivered to your inbox every Tuesday.

Social media insights to your inbox

We take the most important developments and turn them into a curated, easily digestible newsletter delivered to your inbox every Tuesday.